I suppose everybody's house has one person, who, by default, is the "go to" guy for tech stuff. I never asked to be the tech support guy at my house. It just happened. We live in a 60s-era rental house in a suburban cul du sac. The house isn't new and none of the systems in the house are new. We've been in the house for about 3 years. The people before us had some kind of satellite TV service. When they left, the dishes were just left on the roof.
When we moved in, we tried to bring our AT&T Uverse service with us from our old place a mile away. After about 2 weeks of trying it became apparent that the service wasn't available at the "new" place. So we switched to Comcast cable for TV and broadband. They hooked us up pretty quickly. When the installation happened, I paid little attention to the actual work that they did. At that point, I was desperate for connectivity and just wanted it to work.
Fast forward to 3 years later, and I now work from home, and our house's infrastructure is significantly different than when we moved in. During that time, the number of devices that connect to the internet has grown from about six, to about 30. Like many other folks I talk to, we now heavily rely on streaming music and video, and less on Cable TV.
The number of connected devices in our house (WiFi and wired combined) has ballooned over the last three years, and now includes: 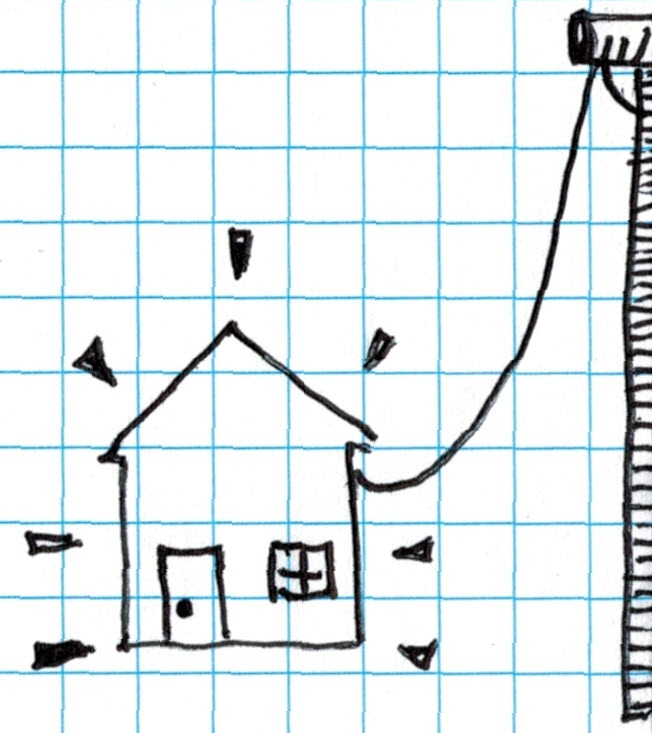 At some point in the last year, we found that our connection would drop unexpectedly during the day. As the house's IT guy, after many re-boots of the router, and some research, I found a temporary fix. I discovered that if I opened a console window and pinged Netflix.com from one of the devises on the network, the connection would often restore itself for all the devices on the network. That fix worked for a while, but then the frequency of the dropped connections increased. It got to the point where I would be pinging Netflix 10+ times a day, to keep things working. It seemed also, that the problem was worse when it rained. Rain doesn't happen a lot here in California (especially this year!) but I saw a pattern and it got me thinking that perhaps the source of the problem was with the wiring that brought the signal by coaxial cable from the junction box on the corner of the rental house, around three sides of the building, to where it entered the house and connected to our cable modem.  Our house was built in the 1960s and, over the life of the building, has been wired and rewired many times as different families came and went. I decided to try replacing the cable wire on the outside of my house. I really didn't want to call the "Nerd Herd" when I wasn't convinced that our connectivity reliability issues were a problem with the way our network is set up. When I started stringing a new wire, I found one splice, and joiner connecting the old, cheap, flimsy cable wire to a new piece. As I made progress along the eves, around the three sides of the building, I continued to find splice after splice. I found seven splicers in all. When I purchased the new wire, I splurged for "quad-shielded" RG6 wire. I figured that if it was worth replacing, it wasn't worth doing it half-way. 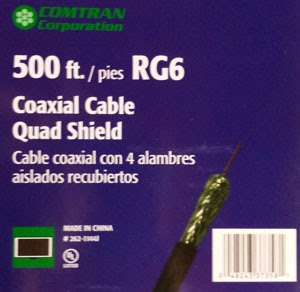 As far as cost goes, I bought a spool of 500 ft of wire and a box of end connectors for about $70 at the Casa de Depot. It took me about 2.5 hours to string the cable. 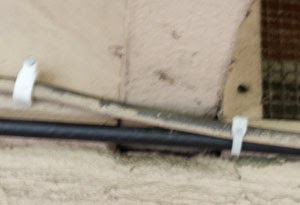 To join it to the house, I mostly used zip strips to connect it to the existing cable wire, but I also added cable joiners (little plastic semi-circles with nails that you pound into the wood of the eves of the house). It was surprisingly fast to do. Since my house is a single story building, I was able to do the whole project with only a 6 foot ladder. This is a pretty simple project that doesn't require much in the way of special skills. The most difficult thing involved is attaching the connector ends. This requires you to strip away the insulation on the wire in a precise way, in order to fit the end on it.
Tools I used:


Since I left the old wire on the building, I did label it with a sharpie marker on both ends as "un-used cable" and my street address so that whomever works on it next knows what is what.
Since I switched over to the new wire, I have not had the connection drop (yet. Knock on wood!).

Did It Solve the Problem?

Did it work, or what? -My main inspiration for rewiring, was to fix the problem of dropped connections. What I really wanted was more reliability. I didn't have a website to measure or quantify that, but I know from the drop in requests for help with computers/devices around my house, that the change has been very successful. Our wired and WiFi connected devices all seem to stay connected and I'm expected a heavenly choir to break out any moment exclaiming "Hallelujah!" The problem is solved.

If you are interested in doing this to boost your connection speed, it may have some affect, but I did not find a significant jump at my house. There was a minor increase, but nothing to write home about. To track your connection speed, try testing your connection speed before you do any wiring. I pointed my browser to Speedtest.net and did several tests at different times of day, and from 3 source servers. Afterwards I tested again, and when I compared the tests from before and from after, I only found a small increase in speed.

Full disclosure: I hit my thumb with the hammer within the first five minutes of working on this project. It hurt like crazy, but it neither slowed me down, nor impeded me from completing it in any way. Be careful. Wear safety eye wear. Work smart. Be careful on ladders, and watch out for bees!