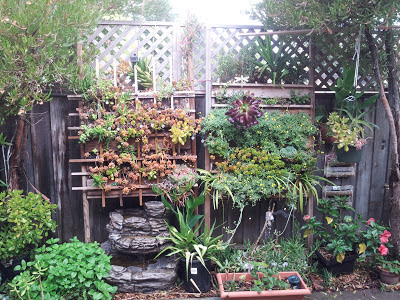 Back in June of 2011 I built my first vertical garden-the one on the left. I build the second one shortly afterwards. Both are built from shipping pallets, slightly modified, filled with dirt, attached to long wooden garden poles and propped against a fence.

The gardens are thriving and are mostly filled with succulent plants. I planted it with some home depot plants and I also got many clippings from neighbors who responded to my FreeCycle posting asking for clippings.

Now that these garden boxes have been going for over a year, they're really established and now the key to keeping them going (besides the usual sunshine and watering) is to keep them trimmed back enough so they don't choke each other out. I have been moving the clippings out to other pots all over my little back yard.

Living in the Bay Area of California as I do, the climate consists of 2 seasons: 10 months of sun and almost no rain when everything dies; and 2 months of clouds and rain when the hills turn green and start to grow again. Last spring, I realized that I had a couple of vacations planned which had the potential to kill all my garden plants. So I read a bit about drip systems I could try, but it seemed expensive for my tiny back yard, and impractical for me as a renter. I wound up going with the old school sprinkler system like golf courses used to use that make the "chick-chick-chick-chick" noise. I have 2 of these sprinklers daisy-chained together, attached to a 30 dollar timer that attaches to the faucet nozel and requires a AA battery. I set the timer up to go for 3 minutes every 12 hours. I plan to change it to 3 minutes every 24 hours, as twice a day seems excessive.
Automating the watering of the garden has made me less attentive to the garden, but it really has thrived and continues to thrive.

You can see in the photo that I tucked a fountain in below the garden on the left. I worried that the garden above would drop a lot of plant and dirt crap into the water, but honestly it doesn't. The trees to the left and right drop a lot more junk into the water than the vertical gardens do. The fountain has nothing to do with watering or irrigation. The fountain was added to provide a tranquil din of noise since our fence backs onto a busy/noisy street. Actually the vertical gardens act as a bit of a noise buffer too, but not as much as I had hoped.

I moved the gardens a couple of times and let me tell you; they weigh a TON! -Man they are heavy! I screwed a heavy duty eye hook into the fence and lashed the vertical gardens to the fence. Partly because we live in earthquake region but mostly just for peace of mind. The weight of these is really substantial. I mentioned that I rent my place so there is the very-real possibility that I will have to move these 2 gardens at some point. If it comes to that, I will probably screw a board connecting the bottom of the posts, and then lash the gardens, one at a time to a hand truck to get them on a truck.

If you're tempted to try this project, I highly recommend it. It was a fairly easy weekend project and has help up really well.