Way Too Many Vertical Gardening Posts


Way Too Many Vertical Gardening Posts


I've been on this gardening jag all summer, since about Father's Day.


I built a second vertical garden this weekend. And the second one was much faster to put together than the first one. Partly because I wasn't constantly stopping to take step-by-step photos, but also because of lessons learned from the first one.


I'll keep this short and sweet.
I found a shipping pallet in primo condition. I used a squared post this time to suspend it from the ground. Since it is such a focal point, I decided to make this one considerably higher off the ground than the previous model. Another difference is that I didn't use any verticals on this one. I pretty-much stuck with the boards that were used on the pallet for the facade. So the openings on the front are all horizontal strips rather than the grid I incorporated in the first design.
I removed all the backing boards except for the boards on the back and replaced them with a piece of 0.5" plywood to function as backing.
When the backing boards were removed, I added firing strips to act as small shelves on the front of this garden box. The idea is to give the plants some support outside of the dirt. In the first design I accomplished this with more-expensive 1"x1" redwood strips, but this time I used inexpensive firing strips to serve the same function. I also added plastic netting to keep the dirt and clippings in while the plants get established. I cut it too wide so it goes around to the sides for extra support. I cut the grid to accommodate the different sized clippings. I used Jade, palm, and various other succulents. I purchased several flats of "Little Pickles", and took clippings of several different types of jade, and other succulents I already had established in my back garden. Ideally I wouldn't have had to purchase any plants, but I spent about $40 on starter plants for this. With every new garden I start, I'm that much closer to being independent of the nursery (actually the big-box hardware store that I go to). 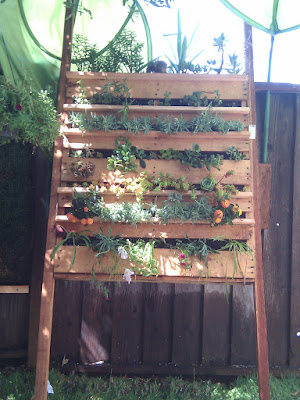 The layout, this time, was a symmetrical design incorporating both purchased and found plants. This time out I tied to use more flowers to have more color than the previous design. The bottom portion has dangling plants like spider plants and other traveling plants to take advantage of the higher design. The higher positioning puts the top of this planter at the top of the fence that it sits against. I used plants called "Little Pickles" and Lantana, among others. Mostly I used succulents, as before, but I also incorporated some spider plants this time.
The assembly of the planter, as I mentioned, went much faster this time around. That made me happy. I knew more what to expect this time.
I did face one unexpected problem this time; I was lazy and didn't staple down the plastic grid material, but when I added the grid fabric, it was problematic. I had laid the pallet down flat on the ground, and added dirt on top, the dirt didn't want to go through the grid. So after some thought, I found a resolution to this problem. I used a loose piece of 1.5" x 0.75"  firing strip and moved it back and forth to make the soil filter down through the grid when it was still laying flat, then I tilted it up vertically and poured in more soil until it was full. Fortunately it was one full bag of soil. 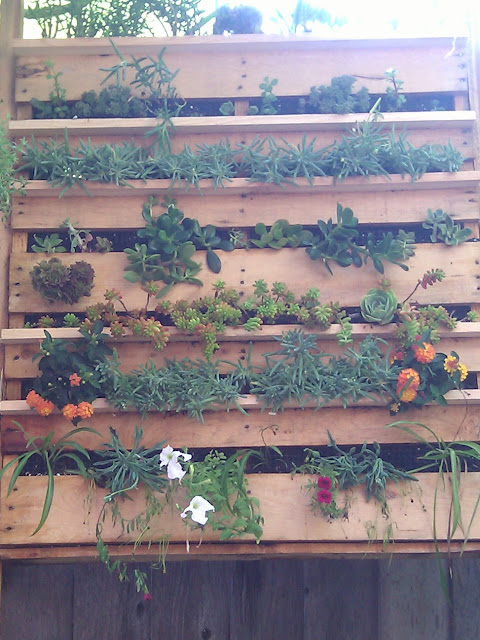 The top layer, this time, has a more dramatic profile. I used a palm, some jade, and other succulents. I really like the way it turned out.
My backyard it starting to look really good. I only wish it did more in the way of soundproofing the noisy road behind the fence. Regardless, I'm really pleased with having both my vertical gardens to snaz up my tiny backyard patio.
Total time to build: about 1 day.
Expense: about $60.
Give this one a try and post your results in the comments. Happy gardening!
Denis.
Posted by Denis408 at 8:44 PM