Chili Peppers Concert in the Redwoods


I was lucky enough to attend a secret show where the Red Hot Chili Peppers performed at Henry Miller Library in Big Sur, California. The show was on July 27, 2011 at the very small (and beautiful) Henry Miller Memorial Library. It was a great show and was the first show of their tour supporting the new album I'm With You, their first album in 4 years.
Here is how Wikipedia describes the show:

On July 27, 2011, the band played their first show since August 2007 and first official show with Josh. The performance was a secret invitation only show with family, friends and music critics in attendance. The band ended July 2011 with two more secret invitation only shows on July 29 and July 31. All three were held in California. [107][108] On July 30, 2011, the band took to a building rooftop on the boardwalk at Venice Beach to film video footage for "The Adventures of Rain Dance Maggie". Inbetween filming, the band played various parts of their own songs and covers for the many fans who were crowded on the streets below. [109]

It was in the woods on the night of the show. We only had a day or two advance notice about the show. After the long, twisty drive along coastal highway 1 to get to Big Sur and the Henry Miller Library, it was surreal to round yet another corner and happen upon a lot of freaky concert-goers, a tour bus and amazing lights shooting up into the giant trees. We were handed these cool handouts at the door. 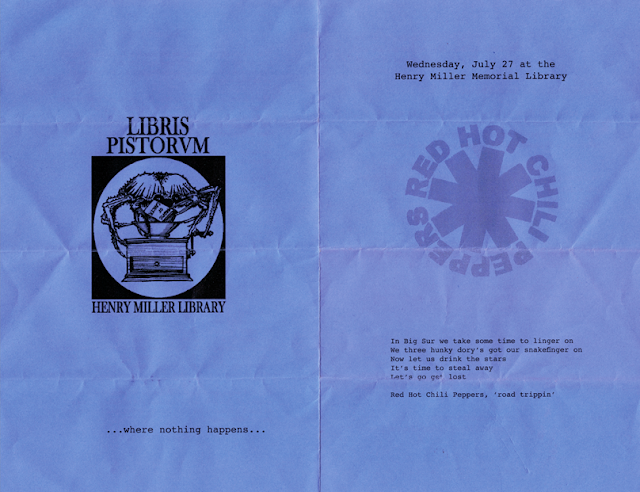 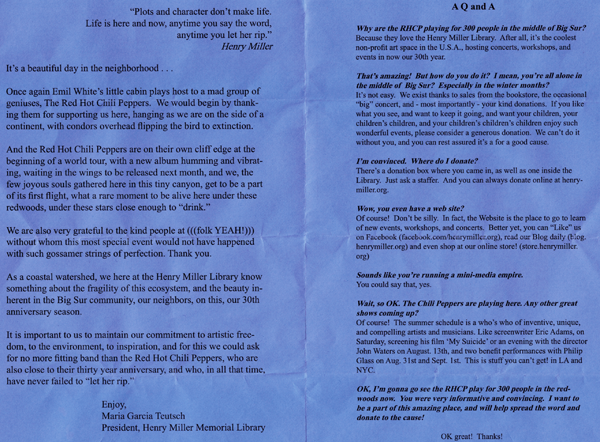 The show was arranged by (((folkYEAH!))) We were treated to a great show and the unannounced, invitation only show was for a crowd of only about 300 people! It was very intimate. I was impressed that the band kept playing when all the stage lights went out all at once! Flea asked the crowd to shine flashlights/phones/ anything-that-glows onto the stage if it happened again (and it did happen a couple more times before they ironed out the problem. Kedis said he was glad it was the lights and not the sound because they could keep playing (and they did!)

The photos here are mine, except where noted. I found a lot of stuff in different places about this show, so I'm collecting a bunch of it here, and adding my own content and comments as well. Enjoy! 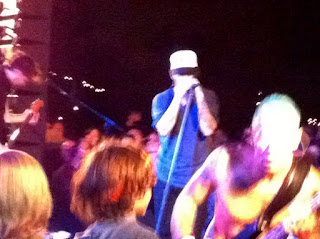 Flea playing directly to kids at stage right. My son, Chad's son, and his (Flea's) daughter during The Adventures of Rain Dance Maggie


On Wednesday night, Red Hot Chili Peppers debuted new songs to an intimate audience under the stars in Big Sur, California. Their appearance at the Henry Miller Library was announced only three hours before the band took the stage, and it was free for the 300 lucky fans and friends who made it through the worn wooden gate.
Rounded out by guitarist Josh Klinghoffer, who replaced John Frusciante, as well as a percussionist and keyboardist, RHCP performed five songs from their long-awaited, Rick Rubin-produced tenth album I'm With You(due out August 30), interspersed with a handful of crowd-pleasing classics.
"We got new songs, we got old songs in the deadhead redwoods out here," said Anthony Kiedis cooly, wearing a tuxedo jacket and an OFF! trucker cap. A towering pine behind him was lit by a pink strobe. The air smelled green and felt damp. It was a surreal space for the band's iconic funk-punk.
But Flea apparently lives nearby and visits the library frequently. According to the show's presenter, coastal promoter Britt Govea of (((folkYEAH!))), the bassist called him personally to set up the gig about a month ago. The venue's executive director Magnus Toren said RHCP paid for the entire thing.
A shirtless, blue-haired Flea joked at the beginning of the set: "Anybody who knows where I live, now's a good time to rob me. Because, you know, I'm here."
They opened with one of the Afro-funk-influenced new ones, "Monarchy of Roses," a darkly burbling high-energy pop song spurred forth by a barrage of percussion. The audience embraced the unfamiliar song without any prodding.
The same was true for the fittingly titled "Ethiopia," which was inspired by a trip Flea and Klinghoffer recently took to Africa at the behest of Gorillaz mastermind Damon Albarn. Congas and scatted vocals prevailed over a jittery groove reminiscent of Talking Heads.
"Look Around" too seemed to be made of a dozen slight interlocking parts, suggesting a more subtle musicality than heard on RHCP's last album, 2006's Stadium Arcadium (from which they played the slap-happy "Charlie").
As befit the mood, and Klinghoffer's artful, melodic guitar style, the band favored songs from 2002's By the Way, swaying through the epic-yet-subdued "Universally Speaking," vamping (aurally, of course) for the slow and sexy "Don't Forget Me," and quietly building to a furious funk crush with the album's titular single.
The coziness was the real draw -- at one point, the guys took turns playing parts of the new single "The Adventures of Rain Dance Maggie" to Flea's 6-year-old daughter, Sunny Bebop Balzary, as she danced on the edge of the stage -- but the Chili Peppers saved a little spice and hellfire for their encore, when they surprised all by launching into "Give it Away."
The sylvan wonderland seemed an odd place for slam-dancing, but a devoted few gave it their all from the grass in front of the band, while the rest rocked, rapped, and thrashed along a bit more quietly. But by 11 p.m., the forest seemed to have swallowed every sound as the lights faded and the crowd trickled out to Highway 1.


For even more photos of the show, check out Terry Way's blog post featuring his amazing photos from the show!