I have lived and worked in Silicon Valley for many years now and I was reminded tonight of a memory that rightfully should be from someone much older than myself. I was reading about a startup called NewsLabs, They're looking for Journalists, stating that newspapers are dead and they are building a community of some sort. Anyway, it really got me thinking about the printing press my dad used when i was growing up in rural Pennsylvania.
As a kid, my siblings and I used to help our father, a poet and English Professor, print short runs of poems, funeral announcements, stationery, and short books on his antique platen press in the basement of the house. Looking it up just now, I understand that the platen press was introduced around 1860 so it would've been around 115 years old when we were using it (assuming the date is correct.)
I am one of a dieing breed who has experience laying out letter type upside-down and backwards. Using wood block spacers to keep the plates centered, in position to hit the inking and printing surfaces of the press.

Example of similar platen printing press
The Chandler and Price (CP) platen press itself was (actually, it still is) a massive one-ton cast iron shiny black machine, about five feet tall and three feet across, with a large flywheel at one side. A motor connected with a belt to the flywheel automated the press and got it going pretty fast. The action of the platen press is basically:
Above: YouTube video showing platen press in operation
As you can see in the video clips, once motorized, the press moves very fast and there are potential risks of getting caught in the press, which would really do some damage. Once you find the rhythm of the machine, it can be fun and fast to do a press run. 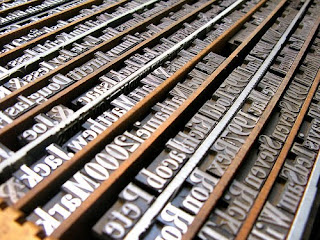 Example of metal type set backwards for printing (photo by Don3rdse.Used with permission)
At the point when the Macintosh personal computer was released (around 1984), my family, though not wealthy by any stretch of the imagination, was right there to get one. It allowed layout, a lot of fonts and the ability to do short run printed pieces with so much less effort, elbow (or other) grease, and time. And that pretty much spelled the end of our use of the press. Looking back now, and comparing the results of the press vs something produced on an injet or even a laser printer, the quality of the press-run is much better, but the effort involved to get that quality is difficult to justify. When that level of quality is needed, it makes more sense now to pay someone else to do it (as lame as that sounds.)
As my dad is finding out, it is hard to get rid of a printing press. Especially one so bulky and heavy. I don't think he has actively tried to sell it online yet though. Writing this has made me feel nostalgic about the old press, but not so much that I'd want to own it, even if I owned a house, but I am genuinely glad for the experience. If you have the chance to operate one, I recommend it. If you want to make it happen, by possibly giving a home to the massive press, contact me and I'll put you in touch with my Pops!

A Poem About The Press
Tell Me When --By Richard M. Sweeney circa 1975 (used with permission) 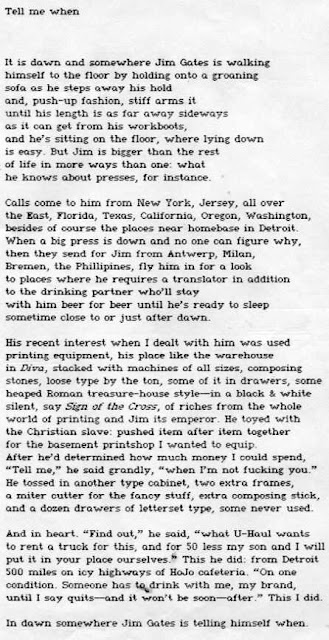 More About Chandler and Price Presses
The repetitive noise that is produced from operating the press is very unique, and memorable. In my mind the visual of the press opening and closing, the smell of the ink, oil and grease all combine to form a really strong memory. [I'm working on finding an audio clip of the press in operation, but no promises.]
To read more about CP Platen presses,check out R Campbell's web page on the topic.


Coming up next time...
Keep an eye out for Episode 2 of this occasional "Analog to Digital" series in which I will be talking about the radical evolution of phones and phone service that I've seen in  my lifetime. Again, more radical than my years, due to growing up in a rural community.
Posted by Denis408 at 1:16 PM